Is the Trinity Biblical? Is God a Trinity? Q&A

MessiahsLove
So, is the Trinity Biblical? Is God a Trinity? This has to be one of the most difficult questions I have ever tried to answer, and I want to apologize to you Ike for taking so long to respond to this one. The Trinity has been a topic of debate for nearly two thousand years, and I have to admit that I have been more than a little intimidated by this subject because I have been wrestling with it for quite some time myself. So, please bear with me on this one, as I try to do my best to explain my conclusions about it.

The word \"Trinity\" does not appear anywhere in the Bible, but it’s a word that was invented to explain the relationship between the Father, Son, and Holy Spirit. It refers to One Being in three persons.

You also mentioned a belief that is known as modalism. Modalism is the belief that the Father, Son, and Holy Spirit represent three modes or aspects of God, not three distinct persons. Basically, God takes different forms at different times.

Both of these theories are trying to explain the unique nature of the relationship between the Father, Son, and Holy Spirit, and both are considered to be monotheistic. However, I’m afraid that both are attempts to describe something that we don’t really understand. We are trying to quantify and measure the immeasurable.

By claiming to understand the nature of God, are we putting Him in a box and making a god of our own imagination?

The Bible even tells us it’s a great mystery.

\"And without controversy great is the mystery of holiness: Elohim was manifest in the flesh, justified in the Spirit, seen of angels, preached unto the Gentiles, believed on in the world, received up into glory.\"
- 1 Timothy 3:16

We need to be careful about not going beyond what the Bible tells us because we don’t want to invent theories or spread lies.

The Bible tells us that Yahweh is one.
Likewise, Yeshua said, “I and my Father are one”.

“Therefore shall a man leave his father and his mother, and shall cleave unto his wife: and they shall be one [echad] flesh.”
- Genesis 2:24

I have spent years trying to understand the Trinity. I studied it in college, I have read several different books on the subject, and I have searched the Scriptures for answers, and I am convinced that the relationship between the Father, Son, and Holy Spirit is a mystery that we may never fully understand, and I\'m not sure that we’re even meant to. We are finite mortals who are trying to describe an infinite immortal God, and anyone who thinks they have it figured out is fooling themselves.

People have been arguing about the nature of the Godhead for nearly 2,000 years, and all it has accomplished is strife and division. One person calls another one a heretic if they disagree about this topic. Churches have been split over this subject, and whole denominations have been formed as a result.

I suggest that instead of arguing about the Trinity, we need to spend our time and energy seeking Him, listening to Him, and obeying Him.

When Moses asked who Yahweh was, He simply responded by saying, “I Am”.

“And Elohim said unto Moses, I AM THAT I AM: and he said, Thus shalt thou say unto the children of Israel, I AM hath sent me unto you.”
- Exodus 3:14

How can the creation even try to understand the nature of the Creator?
It’s beyond our comprehension, and any attempt to define or measure God is utterly futile.

So, to answer your question, is God a Trinity? I don’t know, but I believe in the Father, the Son, and the Holy Spirit, and I believe these three are one. We are not expected to understand how God is, we are simply expected to believe that He is.

“But without faith it is impossible to please Him: for he that cometh to Elohim must believe that He is and that He is a rewarder of them that diligently seek Him.”
- Hebrews 11:6

I hope you found this video helpful, and I hope it encourages you to believe even when you don\'t fully understand.

Is the Trinity Biblical? Is God a Trinity? Q&A 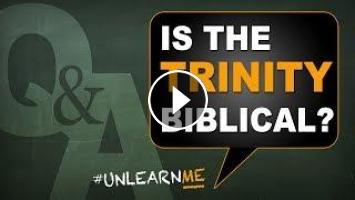 So, is the Trinity Biblical? Is God a Trinity? This has to be one of the most difficult questions I have ever tried to answer, and I want to apologize...