Should Christians celebrate christmas? Why I quit celebrating Christmas

MessiahsLove
Growing up, Christmas was my favorite time of year. I loved everything about it. The decorations, the food, the family, the gifts; it was all so beautiful and exciting for me as a child.

My love for Christmas continued into adulthood. Every year I looked forward to setting up the tree, hanging lights on the house, and buying gifts for family and friends. I was so excited about Christmas that I would start decorating at the beginning of November and leave them up until the end of January. Christmas was my absolute favorite holiday because I thought it was the celebration of Jesus birth.

Then one day someone told me that Christmas was originally a Pagan holiday that was adopted by the Church hundreds of years after Jesus died. I wanted to find out the Truth about Christmas, so I started doing my own research, and was shocked at what I found out.

After doing just a little bit of research (like looking in an Encyclopedia), I quickly found out that nearly everything about Christmas comes from Pagan traditions. The tree, holly, mistletoe, tinsel, lights, gifts, caroling, Santa Claus, and many other popular Christmas traditions all find their roots in Paganism.

I was so disgusted at the Pagan origins of some of our traditions that I began to weep and repent for my involvement in these things. I felt so deceived, and what made it worse is that the lies came from people I trusted - my family, friends, and pastor.

Then I found out that most preachers know the Truth about Christmas being a pagan holiday, yet they keep silent about it. Unlike preachers in past who were not afraid to stand up for the truth.

Listen to what Charles Spurgeon had to say about Christmas in a sermon on Dec 24, 1871.

“We have no superstitious regard for times and seasons. Certainly we do not believe in the present ecclesiastical arrangement called Christmas: first, because we do not believe in the mass at all, but abhor it, whether it be said or sung in Latin or in English; and, secondly, because we find no Scriptural warrant whatever for observing any day as the birthday of the Savior; and, consequently, its observance is a superstition, because not of divine authority.”
- Charles Spurgeon, Sermon on Dec. 24, 1871

Now every December, Christian parents lie to their children about Christmas. Telling them Jesus was born on December 25th, and Santa Claus brings them gifts. These lies are reinforced by the Church, so it is no wonder our kids are turning away from God as they grow up. They realize that Santa Clause and the Easter bunny were lies, and they naturally question what they were told about Jesus as well since he has been so closely associated with those other fictional and mythical characters.

God seeks worshippers who will worship Him in spirit and in Truth, and we know that Christmas is a lie, so how can we continue to worship God in this way?

I made the decision to stop celebrating Christmas because I love Jesus, and I hope my testimony has encouraged you to do your own research about the Pagan origins of Christmas.

Should Christians celebrate Christmas? Why I quit celebrating Christmas. Stop lying to your children about Christmas. Jesus wasn\'t born in December and Santa doesn\'t bring them gifts.

Should Christians celebrate christmas? Why I quit celebrating Christmas 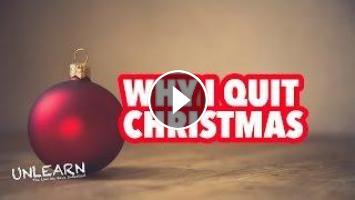 Growing up, Christmas was my favorite time of year. I loved everything about it. The decorations, the food, the family, the gifts; it was all so beaut...